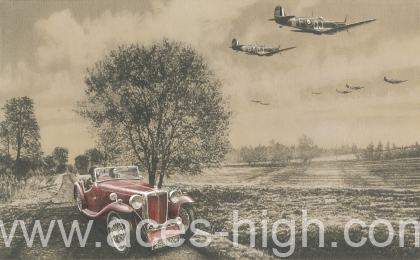 A MOVING TRIBUTE TO THE SMALL BAND OF RAF FIGHTER PILOTS WHO WOULD SAVE EUROPE FROM HITLER’S TYRANNY.

June 1940: and the freedom of Britain lay in the hands of a small band of young RAF fighter pilots. Facing them across the Channel, the all-conquering Luftwaffe stood in eager anticipation of an easy victory, one that would allow were Hitler’s mighty armies to invade.

So heavily were the odds stacked against the RAF, few gave Fighter Command a chance. The American ambassador to Britain reported that ‘democracy is finished in England’. He was wrong.

Although outnumbered more than five to one at the outset, as the savage aerial battles raged continuously over southern England, the courage and dedication of Fighter Command’s young airmen gradually turned the tide. By the end of September the battle was won and, for the first time, the Luftwaffe had tasted defeat.

Richard Taylor’s outstanding composition portrays a more reflective image of those heroic RAF fighter pilots in contrast perhaps to the deadly trials they faced on a daily basis. Just occasionally during that long hot summer of 1940 were rare moments of peaceful respite. Every minute off-duty was time to be savoured, especially for this particular young fighter pilot and his girl as they briefly pause along a quiet country lane to watch the Spitfires from 92 Squadron pass low overhead. For a few moments the distinctive roar of Merlin engines shatters the peace and they both know that this time tomorrow it will be him who will be flying into combat.

Few aviation artists come close to Richard’s extraordinary skill with pencil and paint which is why his drawings are highly prized. This release once again emphasises the commanding heights which he has achieved and collectors will be delighted that a Limited Edition of this emotive piece is now available. Each print is personally signed by Pilots who flew and fought in the Battle of Britain - the very rare autographs of some of the last of that small band of airmen who were instrumental in saving the free world from Hitler’s tyranny.

Every print is personally signed by highly distinguished Battle of Britain Fighter Pilots who flew and fought in the most famous air battle in history:

With the two signatures listed above, this special copy has been double-mounted, ready to slip into a frame of your choice.

These THREE signature editions are also signed by: