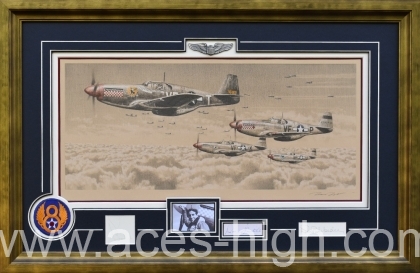 After another successful mission escorting B-17s to the target in Germany, Captain Don Gentile in his P-51B ‘Shangri-La’, leads pilots from the 336th Fighter Squadron, 4th Fighter Group homeward bound to their base at Debden, March 1944.

Formed at Debden on 29 September 1942 from the RAF’s three American ‘Eagle’ squadrons, the Fourth Fighter Group were the oldest fighter group in the Eighth Air Force and destined to be the USAAF’s highest scoring group of the war. Amongst the famous pilots to fly with the unit were notable Aces such as Jim Goodson (15 victories) and Don Blakeslee (14.5 victories), but heading that list is Don Gentile, the main subject of Richard Taylor’s masterful new drawing. With 21.83 victories to his credit he was described by General Dwight D. Eisenhower as a ‘one man air force’ – which later became the title of his autobiography written in 1944.

Richard’s superbly detailed drawing, completed in a mixture of graphite with colour highlights on antique buff paper, has been expertly matted to full conservation standards to include signatures of highly-regarded ‘Deben Eagle’ Aces and comes complete with the original and extremely rare signature of Don Gentile!