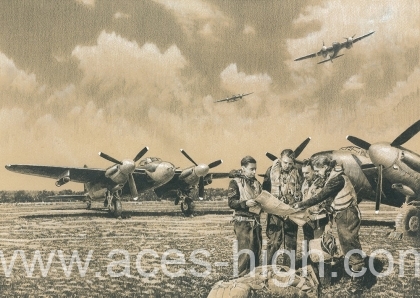 Some have called the Mosquito ‘the RAF’s greatest warplane of World War 2’. Yet, whatever its plaudits, there is little argument that it was one of the most beautiful and, powered by twin Merlins, one of the fastest. It was certainly the most versatile Allied aircraft to have flown in combat during the war: by the time production ceased, the Mosquito had appeared in 43 different variants – more than any other.

And, designed at a time of limited materials, it was mostly built of wood!

Affectionately known as ‘The Wooden Wonder’, the de Havilland Mosquito was rightfully feared by its enemies as it ranged far and wide across Europe, hitting targets with pin-point precision.

In this detailed piece, Richard has chosen the weeks prior to the D-Day as the setting. With the invasion looming, the vital task of dismantling the enemy’s infrastructure across northern France took high priority and there was no better aircraft suited to the task than the Mosquito. As their forthcoming operation becomes clear, Richard depicts the Mosquito crews as they go through one final briefing before take-off and setting out across the Channel to attack the assigned target for today.

Completed a number of years ago in Richard’s ‘trademark’ style of graphite, wash and coloured highlights, over that time two highly-regarded World War Two veterans have personally signed and authenticated the edition, each having flown the amazing Mosquito in combat during the war.

Joining artist Richard Taylor in signing the edition are TWO aircrew who flew Mosquitos during WWII:

Regarded as one of the most gifted exponents of pencil work in the industry, Richard Taylor will hand-craft an original drawing in the lower margin of each print. If you have any particular request, such as specific aircraft markings, please ask when placing your order and we will do our best to accommodate.

Restricted to only TEN copies worldwide, each print in this edition is further enhanced with a unique, individually created double-size pencil drawing, once again finished in the graphite and paint combination that has gained Richard such high international acclaim.

Matted versions are also available... contact us for more info.