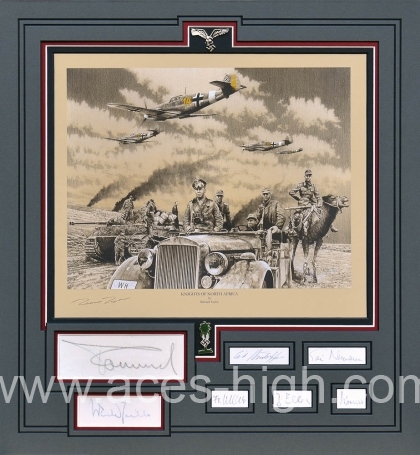 For nearly two years fierce battles raged across the Western Desert as the path of Erwin Rommel’s famed Afrika Korps ebbed and flowed from glorious victories to humiliating defeat. From his arrival in Libya in February 1941 until his departure in March 1943 Rommel’s canny tactics gained him the respect and admiration of friend and foe alike. The British simply called him the ‘Desert Fox’.

In his magnificently detailed drawing titled Knights of North Africa, Richard Taylor depicts the famous German General with his staff, looking out over the Western Desert whilst overhead a patrol of Bf109s from JG27 return from an action nearby. The nearest fighter is that of Hans-Joachim Marseille, the ‘Star of Africa’ who was the Luftwaffe’s top-scoring Ace in the Desert War with all but seven of his 158 victories achieved in North Africa. Neither man would survive the war; Rommel forced to take his own life by a Nazi regime suspicious of his loyalty, and Marseille in a flying accident just days after he’d been awarded the Knight’s Cross with Oak Leaves, Swords and Diamonds.

The historical importance of this artist-signed fine art giclée print edition is highlighted by the inclusion of extremely rare and hard-to-come-by ORIGINAL signatures of both Rommel and Marseille, each carefully matted to full conservation standards. Alongside are the original autographs of five more highly-distinguished Luftwaffe veterans who flew in the desert including Eduard Neumann, the distinguished leader of JG27 in support of Rommel’s Africa Korps who was credited with moulding the careers of many outstanding pilots such as the young Marseille.

Restricted to just TEN copies worldwide, each print is mounted to include the signatures of the following veterans who took part in the Desert Campaign during WWII: