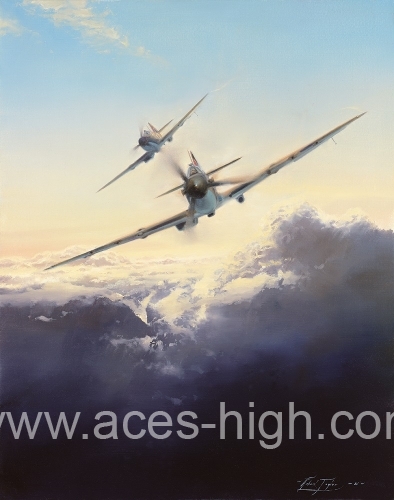 5 March 1936: As soon as he was in the air test pilot Joseph ‘Mutt’ Summers knew that the sleek prototype fighter in his hands was a winner. It was a called a ‘Spitfire’ and not only had it been beautiful to look at but on this, its maiden flight, the nimble little machine was proving to be fast, powerful and incredibly responsive, everything that its designer R.J. Mitchell had hoped for. As he put the Spitfire through its initial paces high over the Solent, Summers began to acknowledge the distinctive throaty roar coming from the new Rolls Royce Merlin 12-cylinder liquid-cooled piston engine bolted into the fuselage ahead of him. It was a sound that friendly pilots would soon come to love and the enemy would fear.

Vickers’ chief test pilot wasn’t the only one impressed with Mitchell’s Spitfire; within three months of that brief maiden flight the Air Ministry were placing their first order. They were just in time, because in mainland Europe thoughts were turning to the prospect of another awful war as Germany’s aggressive new dictator Adolf Hitler, began laying out his visions for a new world order – The Third Reich.

Hitler’s new Reich would be backed by the most powerful military machine of its day and already, the previous year, Willy Messerschmitt had unveiled his radically new Bf109 – a cutting-edge, all-metal monoplane fighter that already threatened to put Germany’s resurgent Luftwaffe into an unassailable position. Soon to be tried, tested and honed into battle-readiness during the Spanish Civil War, the Luftwaffe reckoned their Bf109 was superior to anything in the RAF’s arsenal. But, with the Spitfire, the RAF now had an answer.

When war eventually broke out in September 1939, nine squadrons in Fighter Command were already equipped with Spitfires, and more would follow. Soon Spitfires and Bf109s would be duelling on equal terms over France, and in the Battle of Britain the Spitfire would become a legend.

This previously un-released masterwork Merlin Magic has been selected from the Military Gallery archives to serve as a lasting tribute to this iconic aircraft and all who flew her. With Merlin engines purring in perfect harmony and the warm glow of the morning sun behind them, a pair of Mk.V Spitfires race home as storm clouds gather below. Completed in 1986, this was a period of Robert’s career that included some of his most famous pieces featuring the supreme Spitfire – long sold out masterpieces such as Coming Home Together (1985), Return of the Few (1986) and Bader’s Bus Company (1989).

Adding great provenance to this historic and atmospheric release, the edition has been personally signed by a WWII Spitfire pilot who finished the war an Ace having scored 6 victories over enemy aircraft in this mighty machine.

Every print in this four signature edition has been conservation mounted to include the original autographs of three famous WWII Spitfire pilots:

With all autographs of the Collector’s Edition, each print in this ELEVEN signature edition is conservation mounted to include the original autographs of a further seven highly-regarded Spitfire pilots: