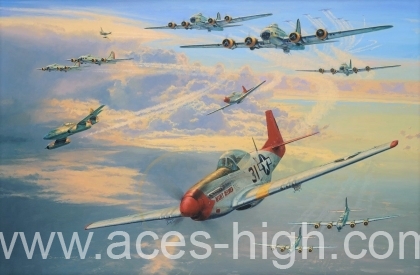 ‘The Americans gave us the best they had, and they gave us everything we needed as and when the need arose….. they were the bravest of the brave, and I know that I am speaking for my own bomber crews when I pay this tribute.

Through bitter experience and heavy losses, RAF Bomber Command had all but forsaken daylight bombing in favour of night operations, but their American allies thought otherwise. Ever since the USAAF had arrived in England it had continued to hone its skill of bombing by day. Churchill however remained sceptical.

Until, that is, January 1943 when at the Casablanca conference, US President Franklin D. Roosevelt and British Prime Minister Winston Churchill decided to pursue a united bomber offensive directed not just at enemy targets in occupied north-west Europe but against Germany itself. Brigadier Ira C. Eaker, Commander of the US Air Forces in England, proposed that “if the RAF continues night bombing, and we bomb by day, we shall bomb them around the clock and the devil shall get no rest.” Eaker stated his case well. Churchill relented and the new round-the-clock offensive was quick to send a shudder through the black hearts of the Third Reich.

The heroics of the American bomber crews were already legend but now, flying much of the trip over Germany without escort, the cost was heavy. As soon as their P-47 and P-38 escorts turned for home low on fuel, the Luftwaffe pounced. The American airmen were forced to endure a savage onslaught not only from enemy fighters, but some of the heaviest flak imaginable. Missions such as Schweinfurt, Regensburg and Ploesti have gone down in history as testament to their bravery.

Then, in early 1944 a new fighter emerged – the long-range P-51 Mustang – one of the finest piston-engine fighters ever made. The massed formations of Fortresses and Liberators now had protection anywhere over Germany, and especially the capital of the Reich – Berlin.  And one of the foremost close escort units of the war was the 332nd Fighter Group – the famed Tuskegee Airmen. Made up of African American pilots, this renowned unit earned a formidable reputation for protecting their bombers and became one of the most highly respected fighter groups of WWII.

In early 1945 what remained of the Luftwaffe continued a stubborn resistance, typified in Anthony Saunders’ majestic painting. In one of their last massed attacks of the war, a group of 25 Me262s, predominately from JG7, engage a formation of B-17s from the 483rd Bomb Group during a mission to attack the Daimler-Benz tank factory in Berlin on 24 March 1945. Luckily for the bombers, their fighter escort, Mustangs from the 332nd Fighter Group – the Red Tails – were on hand to intervene, quickly dispatching three of the German jets in the combat that ensued.

The raid was the longest bombing mission ever undertaken by the US Fifteenth Air Force during World War II – a 1,600 mile round trip involving a gruelling ten-hour mission from their bases in southern Italy, crossing the Alps twice. With insufficient fuel to make it back to base, the crews knew that on their return they would have to land their B-17s on any friendly Allied airfield in northern Italy they could find.

Adding great authenticity to this superb release, the prints are personally autographed by iconic veterans of both the US 15th and 8th Air Forces who fought for Allied victory in Europe during WWII. It is of great historical importance that this historic edition is also endorsed with the signatures of two iconic Tuskegee P-51 Pilots, allowing enthusiasts the opportunity to acquire an important collector’s piece.

The edition is signed by artist Anthony Saunders and individually numbered. To commemorate the heroic contribution of the USAAF in Europe, every print has been personally autographed by two famous P-51 Tuskegee Pilots and two highly-regarded B-17 aircrew:

Widely considered as some of the best and largest in the industry, Anthony’s unique pencil remarques are individually created in the lower margin of the print.