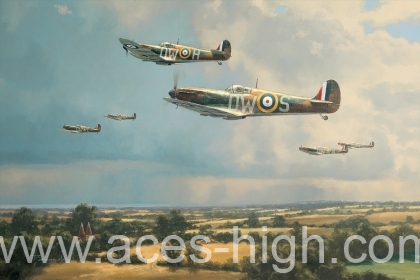 Following the fall of France in June 1940 Britain stood alone, seemingly on the brink of defeat. With the German Army, battle-hardened and flushed with recent success, massing in the Pas-de-Calais the British waited for the invasion that must surely come. Only one thing stood in their way – the English Channel. Before any invasion could take place the Luftwaffe must destroy an already battered RAF Fighter Command in south-east England and Goering boasted that his men could deliver the necessary coup-de-grâce ‘within days’. However, neither he nor Hitler had reckoned on the resilience, skill and determination of the RAF’s desperately small but gallant band of fighter pilots.

For the next three and a half months the battle raged; first as the Luftwaffe tried to lure Fighter Command into the big aerial battle that Goering wanted through provocative assaults on coastal shipping, ports, radar stations and Fighter Command airfields and then, as the RAF refused to be drawn, Goering switched his attention to the daylight bombing of London in an attempt to break British morale. His new plans took a few days to prepare but that was all the weakened British needed. Within a week growing numbers of replacement pilots and machines had arrived with the front-line squadrons and Fighter Command was back to full strength and the Luftwaffe was in for a battering. With increasingly large losses of men and machines, German morale fell and any thoughts of victory, let alone invasion, were over. Fighter Command had repelled the enemy and, for the first time in the war, the Germans had badly misjudged their opponents.

Anthony’s atmospheric painting depicts a definitive moment in late August 1940 as the Mk.I Spitfires of 610 Squadron, one of the units to bear the full brunt of the Luftwaffe’s attacks, scramble away from their base at Biggin Hill towards the Channel  where yet another incoming Luftwaffe formation has been spotted. Combining great skill with thoughtful insight, Anthony beautifully portrays the elegant fighters, glinting in sunlight, racing towards the storm clouds gathering on the horizon. The peaceful harvest taking place in the fields below is in stark contrast to the perils that lie ahead.

Reproduced as a Limited Edition print to commemorate the 80th Anniversary of the Battle of Britain, each print carries the original signatures of highly-regarded RAF Fighter Pilots and Aces who flew during that long summer of 1940.

Along with artist Anthony Saunders, every print carries the original signatures of two decorated Spitfire pilots who flew in combat during the Battle of Britain:

Each print in these SIX signature editions is additionally signed by a further four highly-regarded Battle of Britain fighter pilots:

Widely considered as some of the best and largest in the industry, Anthony’s unique pencil remarques are individually created in the lower margin of the print. With all signatures of the Anniversary edition and consisting of just 25 single sized remarques worldwide, these are a perfect way to collect original art. However, the demand for these superb creations is such that we urge collectors to reserve their remarques early to avoid disappointment.