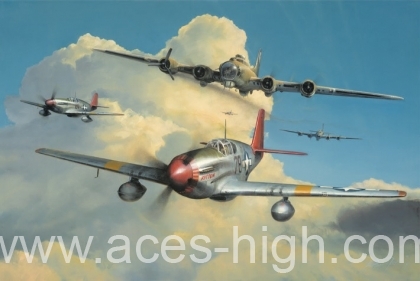 With the words of his Group CO ringing in his ears, a pilot of the 332nd Fighter Group returns to protect a crippled American B-17 bomber after downing two Me109s in quick succession. Agonisingly, two more enemy fighters were left to escape but the pilot knew that under strict leadership of Colonel Benjamin O. Davis, his mission, and that of the other all-black pilots of the 332nd, was solely to protect the bombers. That iron discipline was to earn this famous unit the respect and admiration of hundreds of bomber crews, and to create a legend.

Despite lingering racial prejudice and some opposition within the Air Force, President Roosevelt had ordered the USAAF to form an all-black fighter pilot unit, its crews to be trained at Tuskegee in Alabama. To the surprise of their critics, the Tuskegee Airmen were to prove their detractors spectacularly wrong from the first day they went into action in Italy in May 1943.

In Richard Taylor’s striking painting, the Tuskegee “Red Tail” pilots of the 332nd Fighter Group are a more than welcome sight as they close in to escort home a damaged B17 Fortress of the 483rd Bomb Group.

Each print in Richard’s limited edition ‘Red Tail Escort’ has been fully authorised by the signatures of SIX of the famous Tuskegee pilots.

Richard’s remarques are superb and they sell very quickly so please call us as soon as possible if you would like more information or to reserve your special request.