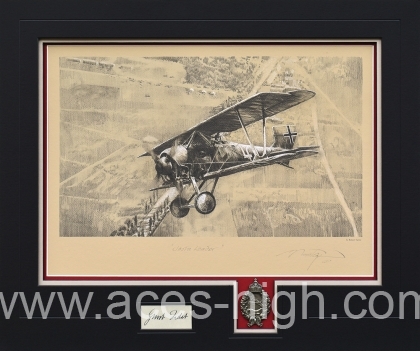 With the end of the war drawing ever closer, Ernst Udet, with 62 victories the highest-scoring German ace to survive the hostilities, and second only to Manfred von Richthofen, sets out towards the front flying his distinctive Siemens Schuckert D.III.

On 6 April 1918 Ernst Udet shot down a British Sopwith Camel whilst flying with Jasta 11, Manfred von Richthofen’s former squadron. It was his 23rd victory and three days later he was awarded the Pour le Mérite – the ‘Blue Max’ – Prussia’s highest military honour. In doing so he’d joined a highly select band that included such top aviators as Max Immelmann, Oswald Boelcke and Manfred von Richthofen, the legendary ‘Red Baron’.

The award was also the start of his most successful period. With Hermann Goering now in charge of Jagdgeschwader 1 following von Richthofen’s death in April 1918, Udet was promoted to command Jasta 4 in May. By the end of August, and now duelling with the newly-formed RAF, his tally climbed to 60. But on 26 September his luck ran out; having shot down two British D.H.9 fighters near Metz, he was badly wounded in the thigh and hospitalised. He was still recovering when the Armistice ended hostilities on 11 November.

But at least Udet had survived the war, and with 62 victories to his name the highest- scoring German Ace to do so. He later travelled the world as a stunt pilot, returning to Germany in 1933, persuaded by Goering, his former commander, to join the new Luftwaffe. Rising to the rank of Generaloberst, and in of charge re- equipping the German aircraft industry, by 1941 he’d become deeply disillusioned both by Goering and Hitler’s policies. Depressed, he shot himself. His friend Adolf Galland was one of the six top fighter pilots forming the guard of honour at his funeral.

Robert’s outstanding masterwork drawing Jasta Leader transports us back in time to the pinnacle of Udet’s career when he commanded Jasta 4. In it we see Udet heading out towards the front in the late summer of 1918 flying a distinctive Siemens Schuckert D.III, its fuselage emblazoned with ‘Lo!’, his sweetheart’s nickname.

The original drawing graces the wall in Robert’s studio as part of his own personal collection, but thanks to the latest digital technology it has been faithfully reproduced as a high-quality giclée fine art print on textured velvet paper. Only 11 copies are available worldwide through the Military Gallery, Robert’s exclusive publisher, with every print signed, numbered and hand-titled by Robert himself. Only then is each copy mounted to full conservation standards to include a museum-quality reproduction Imperial German Empire Pilot’s Badge and the extremely rare and hard-to-come-by original autograph of the famous Ace depicted: