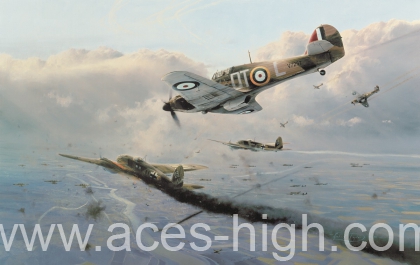 Hurricanes of No.257 Squadron attack a large force of Heinkel 111 and Dornier 17 bombers at 12,000 feet over London on 15th September 1940, during the climax of the Battle of Britain.

Released as a three print series to commemorate the 50th Anniversary of the Battle of Britain these pieces are difficult enough to find individually but a matching numbered set is even more difficult to acquire along with EAGLE ATTACK and SUMMER VICTORY and is priced for the three print set.

Aces High has taken a few copies of Hurricane Force and matted them to conservation standards to include a pair of museum quality replica RAF wings together with the original signatures of another FOUR Hurricane Aces who flew during the Battle of Britain: