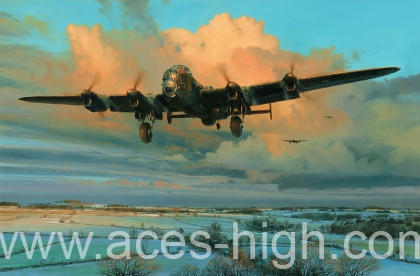 Winter in Northern Europe brings short days, long nights and, for the most part, appalling weather making navigation difficult and flying hazardous. Add snowstorms, gale force winds, freezing temperatures and rudimental navigation aids, it seems a miracle the brave young men of RAF Bomber Command were able to continue at all. But continue they did.

Robert’s superb piece depicts Lancasters of 460 Squadron RAAF returning to their Lincolnshire base at RAF Binbrook following a daylight raid over Germany in the late winter of 1944. With the sun almost set, evening shadows lengthen on a magnificent winter landscape dusted with snow, as Lancaster J-Squared leads the mighty bombers as they descend in the fading light and the squadron motto rings true in the ears of the arriving crew - "Strike and Return".

Each print in this edition has been signed by the artist along with four famous veterans who served with Bomber Command during WWII:

Every print in this exclusive edition is signed by SIX Royal Australian Air Force pilots and aircrew who flew with RAF Bomber Command during their tours in England with 460 Squadron RAAF, 1941-1945.

Each print is personally autographed by the veterans of the Aircrew Edition and additonally signed by a furhter four highly-respected WWII BomberCommand aircrew. Every print is issued with a matching-numbered companion print 'Night Attack' which is personally signed by recipent of the Victoria Cross; Bill Reid.

A highly exclusive edition of just 50 copies issued with extra signatures and the matching-numbered pencil proof, 'Last Lancaster Home', beautifully matted to include the signatures of four recipients of the Victoria Cross Britain's highest award for valour.

At recent events we've had a copy of the Collectors Edition additionally signed by WWII Bomber Command veterans. Issued with a matching-numbered companion print Night Attack there are a total of TWENTY-THREE signatures: