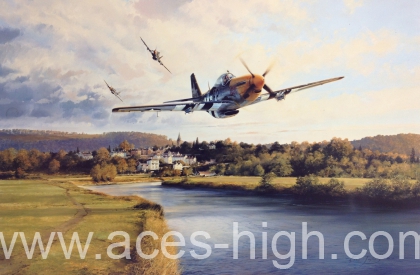 When P-51 Mustangs first appeared in the skies over Berlin, Reichsmarschall Hermann Goering later announced that he knew then that the war was lost. He was right; the P-51s proved themselves the best all-round fighter of the Second World War. Their ability to escort the heavy bombers of the USAAF all the way to Berlin and back signified to the Luftwaffe High Command the death knell of the Third Reich. P-51s are often portrayed by artists ‘in action’, but Robert Taylor chose a very different format for ‘Home Run’, setting the scene in the pastoral idyll of the Rhineland, a far cry from the air-to-air combat duels normally associated with fighters. Two P-51Bs, returning from a long-rang bomber escort mission, race across the peaceful countryside, seeking out targets of opportunity as they race back to their base in eastern France; their Merlin engines shattering the tranquillity of a beautiful little German village, as yet untouched by the ravages of war.

No doubt the peaceful scene was one of the reasons that accounted for the popularity of the piece when it was published in 1990. That, and the fact that the prints were signed by four of the top P-51 Aces of World War II. Don Blakeslee, described by Major General Chesley Peterson as “the best fighter leader the war produced”, along with legendary names of ‘Kit’ Carson, Jim Goodson and Robin Olds. The piece has remained a firm favourite with collectors ever since, although pristine copies now fetch significant prices on the secondary market.

Each print in this edition has been signed by the artist as well as: