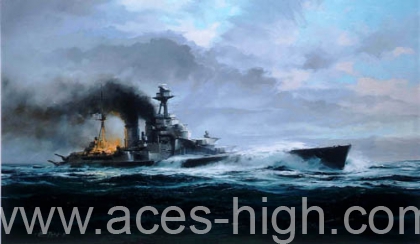 A few minutes before midnight on Wednesday 21 May 1941, the battle cruiser Hood weighed anchor at Scapa Flow. In company with the battleship Prince of Wales, she had received orders to intercept the German battleship Bismarck and her escort Prinz Eugen, who were attempting to break out into the Atlantic through the Denmark Straits.

Launched in 1918, the Hood may have been old but she was the pride of the Royal Navy, her crew some of the finest seamen in the service. And she was fast, even faster than the Bismarck; but that speed hid a fatal flaw - the Hood lacked heavy armour. The protection thought sufficient in World War I was sadly inadequate for a naval battle in 1941. To stay out of trouble the Hood would need all the speed she could summon.

But three days later disaster struck; sighting the two enemy ships at 05.35, the Hood steamed straight towards them, engaging Bismarck with her forward 15 inch guns. As she did so she was hit, first by the Prinz Eugen and then, moments later, by a salvo from the Bismarck which penetrated her lightly armoured deck and exploded in the magazine below. The detonation blew the Hood apart; there were only three survivors.

Robert Taylor is a master draughtsman and in this depiction of the proud Hood, he uses his skill with the pencil to the upmost. With spray bursting over her foredeck, the Hood steams towards her destiny with the Prince of Wales in company behind her. These simple, but moving, pieces were signed by the last of Hood’s three survivors: