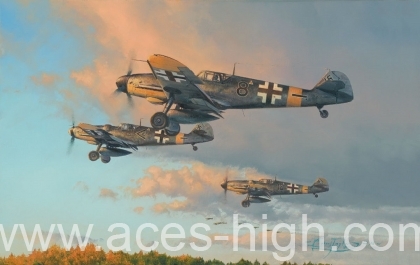 It became known as the most exclusive club in the history of air combat – the Three Hundred Club!

Those Aces with over 100 victories were exceptional; to reach 200 victories was a spectacular achievement. Yet two men went even further shooting down more than 300 enemy aircraft which placed them in a league of their own. They were the elite of the elite, and their names are legendary – Erich Hartmann and Gerhard Barkhorn.

It is no surprise that these iconic Aces scored their victories whilst ﬂying with the legendary ﬁghter wing JG52 and the Geschwader boasted some of greatest Luftwaffe pilots of WWII among its ranks – including the top three Aces of all time. Such renowned pilots as Gunther Rall (275 victories), Wilhelm Batz (237 victories), Hermann Graf (212 victories) and Helmut Lipfert (203 victories) helped this formidable unit notch up more than 10,000 victories making it the most successful ﬁghter wing in history.

Robert Taylor, the world’s premier aviation artist, has created a stunning portfolio dedicated to the two highest scoring ﬁghter pilots of all time. Hunters at Dawn is the ﬁrst release in this pair and features Hptm. Gerhard Barkhorn, Gruppenkommandeur of II./JG52. The great Ace, ﬂying his Bf109 G-6, leads the Stab as they climb out from their base near the Black Sea, early November 1943. The crisp air of day break is temporarily punctuated by the roar of Daimler-Benz engines as the deadly Messerschmitt ﬁghters set off on their daily hunt for Soviet aircraft over the front line.

The legendary Gruppenkommandeur was by now close to his 200th victory, a feat he achieved on 30 November 1943. Even then little did he or his comrades know that this was only a temporary milestone in his exceptional combat career – although the enemy might have feared it.

Paying tribute to this great Ace, the edition is signed by iconic Luftwaffe Aces who ﬂew on the Russian Front, giving collectors the opportunity to invest in a true piece of history. Specially produced with the serious collector in mind is the inclusion of the exceptional Tribute edition, combining a unique Robert Taylor original work with the rare signature of Gerhard Barkhorn along with other renowned Eastern Front Luftwaffe Fighter Aces.

Joining Robert Taylor in signing every print are two renowned Luftwaffe Fighter Aces who flew on the Eastern Front during World War II:

Representing the ultimate in collecting, each print in this exceptional edition is issued with an ORIGINAL PENCIL work specially created by Robert Taylor. Each drawing is signed by three Luftwaffe fighter Aces who flew on the Eastern Front and conservation matted to include the original signatures of three more, including Gerhard Barkhorn.

The Aces included in this historic edition amassed a staggering total of 1012 victories!