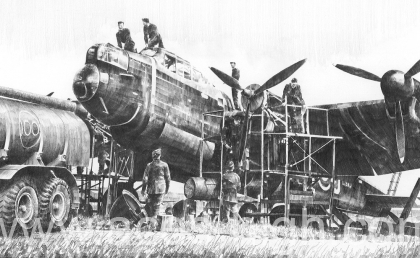 Ground crew tirelessly carry out vital maintenance on a mighty Lancaster bomber in preparation for the next raid over occupied Europe.

Richard's outstanding piece acts as a lasting tribute to all those who served with RAF Bomber Command during WWII - from the devoted ground crew to the hard-working aircrew.

This is an ideal piece to have additionally autographed at our many Bomber Command signing events, creating a very personal and potentially valuable multi-signed print.

Limited to just 225 copies worldwide each print is numbered and personally signed by the artist.

This Limited Edition print is matted to full conservation standards to include RAF wings and the original signatures of TWO highly-regarded Bomber Command pilots:

Just fifty copies of this very special edition have, over a period of time, been personally signed by THIRTY FIVE pilots and aircrew who flew with RAF Bomber Command during WWII - many of whom are sadly no longer with us. They include veterans of the famous Dambusters Raid, Pathfinder aircrew, pilots who attacked the mighty German battleship Tirpitz and Prisoners of War who attempted to escape capture:

With all signatures of the Artist Proof, this exclusive edition is conservation matted to include the original pencil autographs of a further eight highly decorated and influential veterans of Bomber Command – making a total of FORTY THREE signatures, including a Dambuster, Pathfinders and holders of the Victoria Cross: