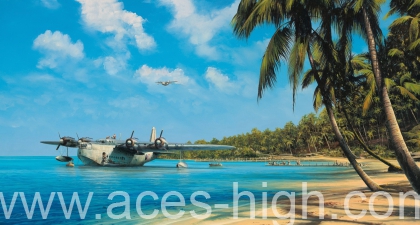 “It was tough, reliable and could turn its hand to almost any maritime task”

On Wednesday 22 June 1938 a new sound was heard over the humid streets of Singapore as four Bristol Pegasus radial engines heralded the arrival of the RAF’s newest flying-boat- the Short Sunderland. For the men of 230 Squadron gathering on the slipway at Seletar, the approaching aircraft looked formidable and even from a distance, they could spot the powerful array of .303 machine guns it possessed.

With war looming and recognising the strategic importance of Singapore, the Squadron had been chosen as one of the first units to be re-equipped with the world’s most advanced flying boat - the Sunderland.

Tough and reliable, the Sunderland would prove that it could turn its hand to almost any role that was asked of it. With a range approaching 3,000 miles it was ideal for the long-range maritime reconnaissance patrols it would need to cover the vast expanse of the Indian Ocean, especially following Japan’s callous entry into the war and the fall of Singapore.

As the war progressed, Sunderland flying-boats were increasingly used to attack enemy shipping between Burma and Malaya in the Bay of Bengal and over a 32 day period in the summer of 1944 two Sunderlands from 230 Squadron evacuated 537 critically wounded soldiers from the Chindit special forces by landing on a lake deep behind enemy lines in Burma. Following the Japanese surrender 230 Squadron found themselves once more in Singapore, this time to repatriate Allied POWs liberated from Japanese camps.

Richard Taylor has once again completed a magnificent painting as a tribute to the outstanding Sunderland and the men who flew it in the Far East. As the sun beats down on tropical island anchorage a Mk III Sunderland from 230 Squadron unloads essential supplies at a forward base on an archipelago deep in the Indian Ocean. A second aircraft, breaking a patrol, prepares to land.

Three of the last surviving veterans who actually flew and fought against the Japanese in Sunderlands with 230 Squadron have signed each print of Tropical Duties, their signatures adding a truly historic link to the many unsung heroes of World War II.

Already celebrated for his undoubted skill with the pencil, Richard Taylor has once again raised the bar and taken his Remarques to a new level by introducing subtle coloured highlights to his work.  The results are simply outstanding!  Richard is happy to undertake special requests so if you have one, just ask!