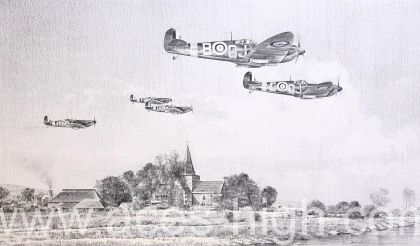 Mk.I Spitfires of 92 Squadron pass low over the English countryside as they return to base after a mission over the Channel during the Battle of Britain, summer 1940.

This heart-warming scene serves as a lasting tribute to the brave aircrew who flew during that long, hard summer and adding great authenticity, each print is personally autographed by THREE prominent Spitfire pilots who flew in combat during the Battle of Britain, PLUS the Forces’ Sweetheart, without doubt one of the most iconic figures of the last century:

To make this copy even more special it has been mounted to full conservation standards to include museum-quality reproduction gold RAF Sweetheart wings. Please be aware that mount colours may vary slightly.

We’re delighted to have highly-restricted quantities of original signatures that can be included within the matting of your piece - CONTACT US for further details or to discuss framing.