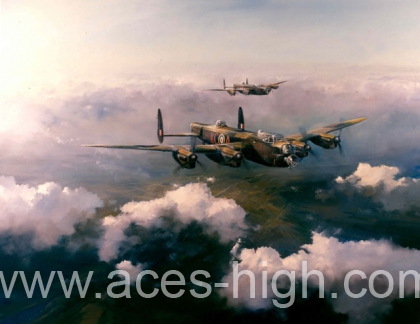 This very early Robert Taylor image is a romantic study of the famous Lancaster bomber, mainstay of RAF Bomber Command during World War II. The prints appeared in two versions, each signed by a holder of the Victoria Cross, both of whom, in their own very different ways, stood as outstanding examples of the courageous men who flew with Bomber Command. One of those men was Leonard Cheshire, one of the most determined bomber leaders of the war who was awarded his Victoria Cross for over four years of continued and sustained bravery. When you read this extract from his citation it will help to understand why his signature is highly collectable:

“In four years of fighting against the bitterest opposition, he has maintained a record of outstanding personal achievement, placing himself invariably in the forefront of the battle. What he did in the Munich operation (an experimental raid carried out in April 1944 to test out a new method of target marking) was typical of the careful planning, brilliant execution and contempt for danger which has established for the Wing Commander a reputation second to none in Bomber Command.”

Because this is such an early print it is hard to find copies that are in mint condition; many have fallen victim to some degree of fading. There are some, however, that have been stored carefully and have never seen the light of day, the colours remaining fresh and vivid. Whenever possible these are the only copies we offer.