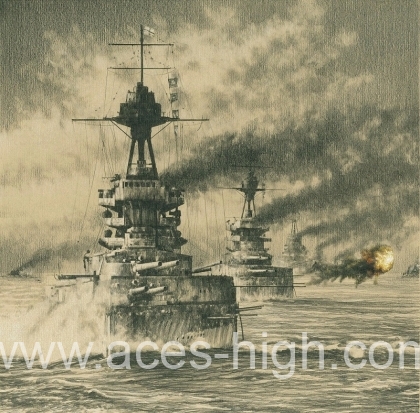 For more than a hundred years Britain’s Royal Navy had ruled the waves and by 1916 Admiral Sir John Jellicoe’s Grand Fleet, based in northern Scotland, was one of the jewels in its crown. With its mighty ‘dreadnought’ battleships dominating the North Atlantic and North Sea, the German High Seas Fleet had little chance of venturing out into the Western Approaches.

But Admiral Reinhard Scheer and the Imperial German Navy had a bold and cunning plan to change that.

Using a fast-sailing scouting force as bait, Scheer hoped to lure Royal Navy battlecruiser squadrons into the waiting arms of the entire German fleet before the Jellicoe’s Grand Fleet had even arrived. The German scheming might have worked but the British had a secret weapon – code breakers; Sheer’s battle plan had been intercepted, enabling the Royal Navy to get to sea earlier than the Germans expected.

So on 31 May 1916 it was the Germans who were surprised. The two fleets met as evening commenced, some 250 warships and around 100,000 men in a battleground some 60 miles west of Denmark’s Jutland peninsula. Jellicoe, in a series of quick-thinking and complex manoeuvres, took advantage of the setting sun to position Scheer’s fleet obligingly back-lit against the evening light. As darkness fell the German fleet, heavily outgunned, ran for home through a dogged night pursuit by the British.

The Battle of Jutland had been ‘a close run thing’; the only time that both navies’ battleships engaged in a major combat. The Royal Navy had lost 14 ships and over 6,000 men, the bloodiest day in British naval history, but they were on station and ready for action the next day whereas the Germans, although their losses were lighter, had barely managed to avoid a rout.

Following several successful releases commemorating the Great War, acclaimed artist Richard Taylor has created another powerful pencil edition in memory of all those who fought in the bitter conflicts at sea. This highly-detailed piece shows ‘Dreadnought’ battleships from the Royal Navy Grand Fleet opening fire on warships from the German High Seas Fleet during the evening fleet action of the Battle of Jutland, 31 May 1916.

To honour all those who served in the Royal Navy during The Great War, the Military Gallery is proud to offer this highly restricted and exclusive portfolio.

Every copy of FLEET ACTION is conservation matted to include an ORIGINAL set of WWI Campaign Medals – The 1914 Star, British War Medal and Victory Medal – which have been sourced and collected over a number of years. Each group of medals was actually issued to a member of the Royal Navy and have the recipients Service, Rank, Name and Number impressed on them. These medals became affectionately known as ‘Pip, Squeak and Wilfred’ after a long running cartoon featured in the Daily Mirror newspaper from 1919-1956.

Fully certiﬁed and authenticated, no two medal groups are alike meaning each portfolio in this extraordinary edition is completely unique and cannot be replicated. The service number of the recipient is included with each set of medals allowing collectors to further research their history.

VOICES FROM JUTLAND by Jim Crossley

Each matted print is issued with a matching-numbered copy of the outstanding book Voices From Jutland written by historian Jim Crossley whose own father served as a Midshipman in the Royal Navy during the Great War. It is an imaginative and informative analysis of the largest naval battle of WWI including accounts from those involved at Jutland. Issued with its own luxury embossed slipcase, this hugely informative book includes a vast array of resources such as wartime photographs, maps, comparison tables, charts and diagrams.

Regarded as one of the most gifted exponents of pencil work in the industry, Richard will hand-craft an original drawing in the lower margin of each print to create a unique collectors piece. If you have any particular requests, please ask when placing your order and we will do our best to accommodate.