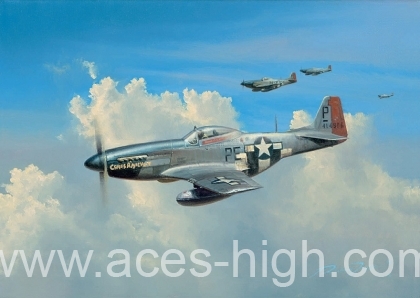 In early July 1943, a few days after landing in Scotland aboard the liner Queen Elizabeth, the 352nd Fighter Group arrived at their new home – the former RAF airfield at Bodney. Originally equipped with P-47 Thunderbolts, in April 1944 they transitioned to P-51 Mustangs, and their distinctive blue painted noses soon became familiar sights in the Norfolk skies.

Richard’s beautiful painting portrays blue-nosed P-51s of the 328th Fighter Squadron high above towering cumulus clouds over East Anglia in November 1944. Led by Major George Preddy, the P-51 pilots prepare to escort a large formation of B-17s on yet another arduous long range mission to Germany.

Joining artist Richard Taylor, each print has been individually signed in pencil by TWO highly regarded P-51 Mustang pilots who flew in combat with the 352nd Fighter Group.

In addition to the two signatures of the Limited Edition, the THREE signature Artist Proofs have also been signed by an outstanding 352nd Fighter Group Pilot:

In addition to the three signatures of the Artist Proofs, the FOUR signature Remarques have been signed by an additionsl 352nd Fighter Group Pilot:

This limited edition print is mounted to full conservation standards to include museum-quality reproduction USAAF Wings and the original signature of an additional highly-regarded P-51 Mustang pilot who flew in combat with the 352nd Fighter Group: