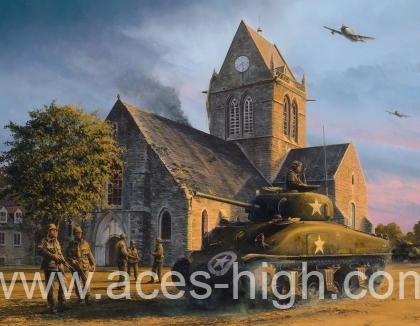 For nearly four years, the swastika had flown belligerently over the small town of Sainte Mere Eglise in Normandy. Suddenly, shortly after midnight on the night of 5/6th June 1944, parachutists from the 82nd Airborne Division began landing in and around the town.

By 04.30, after a tough fire fight, troopers from the 505th PIR had raised another flag over the town – the Stars and Stripes – and Sainte Mere Eglise had become the first town in Normandy to be liberated by the Allies on D-Day. Sherman tanks landing on nearby Utah Beach with the US VII Corps were soon passing through the newly liberated town on the way to the front.

This outstanding tribute has been issued to commemorate the men that fought so gallantly at Normandy in 1944. The edition has been signed by some of the most eminent American veterans to take part in the action, fighting from Normandy to final victory in Germany.

In tribute to all veterans that fought in the Normandy campaign, this outstanding edition has all the components of the Limited Edition. However this ELEVEN signature edition is issued with a separate ORIGINAL pencil drawing by Richard Taylor. This drawing is personally signed by an additional five Veterans that participated in various operations on D-Day and is conservation matted to include the signatures of a further three veterans from the 101st’s famous “Easy Company” made popular through the HBO series “The Band of Brothers.”