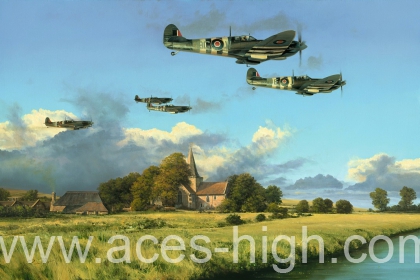 On 6 June 1944, the Allies embarked on what was to become one of the most epic days in the long history of military warfare, D-Day – the invasion of Normandy.

Fighter Ace Johnnie Johnson leads MkIX Spitfires of his No.144 Canadian Wing back to their base at Ford after a long day of operations over Normandy shortly after D-Day. The wing flew constant fighter sweeps throughout the Normandy Invasions, before relocating to France on June 15th 1944.

This outstanding edition is personally signed by highly prominent Aces who flew with the Canadian Wing during the Normandy Invasions, under the leadership of the highest scoring RAF Ace of WWII – Johnnie Johnson.

Every print has been personally signed by the artist, Richard Taylor, together with the following two Aces who flew Spitfires with the Canadian Wing during D-Day:

Each copy has been individually signed by a further two Spitfire pilots who flew with the Canadian Wing, making a total of FOUR signatures.

Two Remarque editions will be issued, the first, limited to 25 copies, will each have an ORIGINAL pencil remarque; the second, restricted to just TEN COPIES, can be issued with either TWO separate and individual drawings or an outstanding DOUBLE SIZE remarque drawing - we can also take requests on the particular drawing that you would like to order.

Richard has created ten unique original pencil drawings, which will accompany the main print as issued with the Collectors Edition. Each drawing is then conservation matted to include the original pencil signatures of some of the most prominent Aces to fly with the Canadian Squadrons including their Wing Leader, the highest scoring RAF Ace of WWII, Johnnie Johnson. The ELEVEN pilots featured in this edition achieved a total of 133 air victories between them:

In our opinion Richards pencil work is amongst the best in the industry and now is the time to invest in an original piece of work of art by this rapidly developing artist. The remarques will look superb on this print and we really do expect them to sell out so please contact us as soon as possible for availability or with your special request.