DAMBUSTERS - THE MORNING AFTER 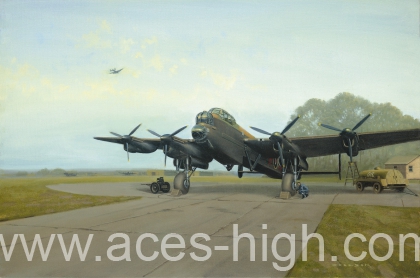 Of the many thousands of heroic night raids accomplished during RAF Bomber Command’s long six year campaign, one, above all, captured the imagination of an admiring public.

Just after midnight on the night of 16/17 May 1943, Lancaster crews of 617 Squadron undertook what was to become the most remarkable raid of WWII when the specially selected crews made a surprise attack on the mighty hydro-electric dams in the Ruhr. These were the Dambusters.

Gerald Coulsonʼs painting shows a single Lancaster of 617 Squadron, one of the lucky ones having made it safely back to base after that fateful night in May 1943. It stands proudly alone as if in tribute to those that didn’t return.

In tribute to the brave men who undertook the historic Dams mission, each print is authenticated by three veterans of 617 Squadron from the night of 16/17 May 1943.

The 50 Artist Proofs are additionally signed by leading international movie star RICHARD TODD, who played the part of Wing Commander Guy Gibson in the classic 1955 film ʻThe Dam Bustersʼ.