THE BATTLE OF TRAFALGAR 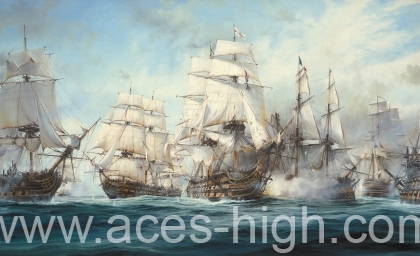 When Admiral Horatio Nelson routed the combined French and Spanish Fleet off Cape Trafalgar he won the single most decisive and far-reaching battle in naval history. Though not a single British ship was lost, Britain’s most famous naval figure died in the battle.

Robert Taylor’s magnificent painting shows Victory breaking through the enemy line at 1.00pm 21st October 1805. A broadside has crippled Admiral Villeneuve’s French flagship Bucentaure, seen off Victory’s port side, while Nelsons gunners fire a second broadside into the Santisima Trinidad. Just astern, the Temeraire manoeuvres to trap the Redoubtable between herself and Victory, and thus seal her fate.

A contemporary masterpiece, Robert’s piece is regarded by many to be the finest and most accurate account of this famous sea battle painted in modern times.

Each print in this exclusive Anniversary edition is numbered, certificated and personally signed by the artist Robert Taylor.

Each print is beautifully conservation matted to include a section of PURE ENGLISH OAK removed during the restoration of HMS Victory. This is a unique and possibly never to be repeated opportunity to acquire part of the Royal Navys most famous warship, over whose timbers history was made. To guarantee the authenticity of these rare historical items, each is issued with an official Certificate of Provenance endorsed by the Royal Navy Museum, Portsmouth.