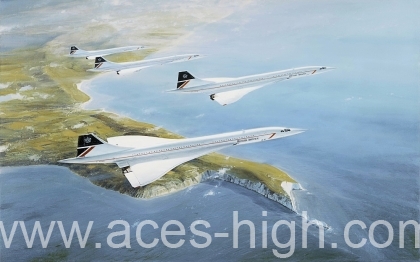 In March 1969 what is probably the most beautiful commercial airliner ever built took to the skies for the first time, and with great success. Its name was Concorde, and this delta-winged, eye-catching, engineering marvel would soon make the dream of supersonic passenger flight a reality. She was a thing of beauty and when the call sign ‘Speedbird’ went out, every pilot in the world knew exactly what aircraft they were talking about.

Concorde’s speed remains impressive and, for a commercial jet, has never been surpassed; with four mighty Rolls-Royce Olympus engines producing a cruising speed close to 1,350 mph and reaching an altitude of 60,000 feet – it took a mere 2.75 seconds to travel a mile! Way ahead of its time, this much loved aircraft was capable of crossing the Atlantic in less than three hours. As passengers sipped champagne and marvelled at the curvature of the earth it was no wonder that flight crews were often reported to have announced that ‘We thought you might like to know how the flight is progressing – the answer is quickly.’

Robert’s iconic piece portrays an event that happened over the Isle of Wight on Christmas Eve 1985 when British Airways decided to celebrate 10 years of Concorde’s commercial service in a unique way. Taking off in spectacular fashion from Heathrow airport, they flew four Concordes in formation along the south coast for a series of special birthday photos.

Originally published in 1986, the limited edition print was signed by Group Captain Brian Trubshaw, Concorde’s chief test pilot, and Captain Brian Walpole who not only commanded the first supersonic commercial flight from London to New York but also barrel-rolled Concorde during testing. The edition is long sold out; it will always remain in great demand and rightly commands high prices on the Secondary Market.

Now, thanks to the latest digital technology unavailable at the time, we are delighted to make this historic image available as a Giclée Proof on Canvas. Printed directly onto fine-weave canvas with an outcome that Robert describes as ‘stunning, and as close to my original painting in both colour and texture as I believe is currently possible’, every Proof is personally inspected, approved and signed by him. Each individual copy is then validated by the Military Gallery and issued with a unique Certificate of Authenticity.

A MASTERWORK TO BE TREASURED FOR A LIFETIME!

Due to demand from collectors, Concorde Formation will also be available as a highly exclusive Exhibition Proof. The extra-large size makes it an imposing centre-piece for larger spaces, such as reception areas, entrance halls, hangars or exhibition displays.