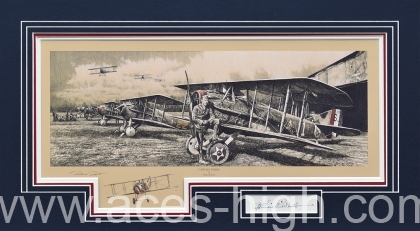 For once Eddie Rickenbacker, the newly-appointed commander of the 1st Pursuit Group’s famous 94th ‘Hat-in-the-Ring’ Aero Squadron, was flying solo. It was Wednesday 25 September 1918 and with a string of victories behind him he was already an Ace when he now spotted a flight of enemy aircraft which included Halberstadt reconnaissance planes and five of Germany’s formidable new fighter, the Fokker D.VII. Although outnumbered seven to one he was unobserved and, climbing his Spad XIII hard for the sun, decided to attack. ‘I soon had the satisfaction of realizing that I had escaped their notice and was now well in their rear,’ he later wrote. ’I shut down my motor, put down my head and made a beeline for the nearest Fokker.’

Rickenbacker quickly dispatched one of the fighters and then a Halberstadt before the surviving Germans fled the scene. For his part Rickenbacker was awarded the Distinguished Flying Cross, later upgraded to America’s highest award for conspicuous gallantry – the Medal of Honor. Promoted to Captain in October 1918, by the end of hostilities on 11 November his tally stood at 26 air victories to make him the top-scoring American airman of World War One. He was also the most decorated.

Before the war he’d been a racing driver, setting a world land speed record of 134mph in 1914 and, with hostilities over, he returned to the fast lane creating, amongst other pioneering ventures, his own car company. He then took over and ran Eastern Air Lines and was badly injured in barely surviving a plane crash that killed both pilots and 11 other passengers. It wasn’t his only brush with death; near misses in racing, close encounters in battle that included an enemy bullet so close that it scorched his flying helmet and then surviving 24 days at sea after the elderly B-17 in which he was flying as a civilian came down in the Pacific during World War Two.

Just 15 copies of this memorable edition are available worldwide!

In an exquisite tribute to America’s World War I Ace of Aces, Richard Taylor has created yet another inspirational drawing to add to his growing list of highly-collectible masterworks. Deservedly respected for his skilful technique of incorporating pencil and colourwash highlights, Richard furthers his repertoire of World War I subjects with Captain Eddie, a superb depiction of Rickenbacker alongside the Spad XIII fighters of his 94th ‘Hat-in-the-Ring’ Aero Squadron on the Western Front in 1918.

To make every print in this highly-restricted edition completely unique, each has been returned to Richard’s studio for the inclusion of a specially-commissioned pencil Remarque in the lower border.

Completing these very special portfolios and adding great historical importance, prints are then mounted to full conservation standards to include the original and fully-authenticated signature of the famous Ace depicted which have been sourced and collected over a number of years and from different periods of his life: