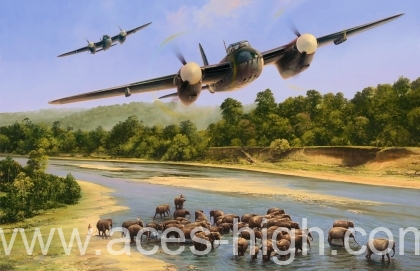 Led by Wing Commander J.B. Nicolson VC, CO of 27 Squadron (the Flying Elephants) based in north-east India, a pair of Mosquito FBVIs power their way home across jungle-covered hills of northern Burma. They have just completed the squadron’s first combat operation, a successful strike against Japanese ground targets along the vital railway link near Mandalay, Christmas Day 1943.

Fought in often atrocious conditions, the war against the Japanese in Burma was cruel, savage and brutal. Flushed with thoughts of invincibility after their quick victories in Malaya and Singapore, by 1943 the Imperial Japanese Army had pushed the Allies all the way back to the borders of India, the jewel in the crown of the British Empire. However the men of the ‘Forgotten Army’ had quickly developed into one of the toughest fighting forces in the world, and they would push the Japanese back to Mandalay and then south to Rangoon and ultimate victory.

This victory would have been impossible without the support of the RAF and Allied forces who supplied and supported the army from the air. On the ground no enemy target was safe from the marauding strike aircraft of the RAF and any Japanese force, tank, truck, gun or train that dared to show itself was in danger of quick elimination.

Each print has been personally signed by THREE RAF veterans who flew the de Havilland Mosquito during World War II. They are also signed by the artist, Richard Taylor, and individually hand-numbered.

The Collector's Edition and Remarques

These NINE signature editions are additionally signed by the following aircrew that flew the Mosquito during WWII: