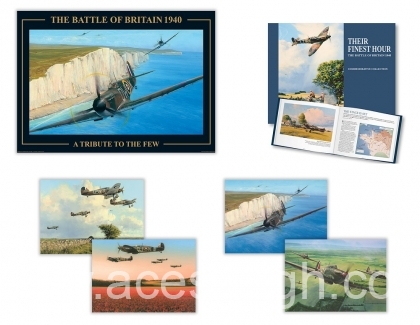 By July 1940 perhaps the most famous air battle in history was underway and the fate of Britain lay in the hands of less than 3,000 young airmen from RAF Fighter Command – Churchill’s famous ‘Few’.

Over the next three months, although impossibly outnumbered, the RAF repelled the might of Hitler’s war machine and changed the course of the war in Europe.

To commemorate this historic battle we’re proud to offer this exclusive bundle – only available to Aces High customers whilst stocks allow!

Not simply a collection of artwork; first and foremost this commemorative book is a historically accurate recollection of events, painstakingly researched with the assistance of leading historians. However, being illustrated by the world’s leading military and aviation artists rather than photographs makes it a totally unique account and very different to any others.

A TRIBUTE TO THE FEW - Special Poster

Featuring a stunning image by Richard Taylor titled ‘Coastal Patrol’ which depicts Mk.I Spitfires of 610 Squadron flying a defensive patrol over the White Cliffs at the height of the battle in August 1940.

We’ll also include a carefully selected pack of TEN greetings cards featuring works by leading aviation artists such as Robert Taylor, Anthony Saunders and Richard Taylor, all themed on the Battle of Britain.

**All for one exclusive price whilst stocks allow!**