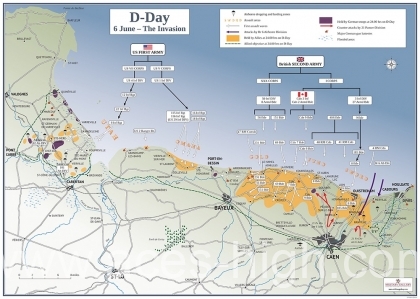 Shortly after midnight in the early hours of D-Day, 6 June 1944, three Allied airborne divisions began landing in Normandy. Their task was to secure the flanks for the mighty American, British and Canadian armies to storm ashore on five beaches along a 50-mile stretch of heavily fortified enemy shoreline.

Codenamed Operation Overlord, the invasion was the largest, most complex and difficult amphibious landing ever undertaken which, by the following spring, would lead to the ultimate defeat of Germany and the end of the war in western Europe.

This superb map depicts details of the first day of this heroic operation. It illustrates the Allied armies involved and the beaches on which they landed; what their first day objectives were, and how close or far they came to achieving their goals.

Framed copies are availabe - contact us for more info.