ATTACK ON THE HIEI 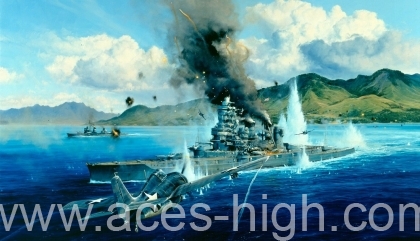 Marine Ace Captain Joe Foss leads a flight of eight F4F Wildcats of VMF121, based at Henderson Field, Guadalcanal, in a diversionary attack on the Imperial Japanese battlecruiser Hiei north of Savo Island, Friday November 13, 1942. In the distance TBF Avenger torpedo bombers of VMSB-131, having already attacked from the starboard side, head for base. That evening, after relentless air attack, the Hiei, disappeared beneath the sea - the first Japanese battleship sunk by American Forces in World War II.

Prints in this signed and numbered limited edition are personally signed by Marine Corps Ace and Medal of Honor recipient Joe Foss along with three pilots who flew with him:

Each Millennium Proof is issued with a matching numbered companion print, Corsair Recovery.  Each companion print has been signed by two outstanding Royal Navy Fleet Air Arm Aces who fought in the Pacific Theater:

Each print in these exclusive editions is returned to Robert Taylor's studio to have a stunning original pencil drawing created to order in the border of the print. This is a unique opportunity to acquire an original work by the world's most collected aviation artist.