Home > Artists > Robert Taylor > THE ROAD TO THE RHINE

THE ROAD TO THE RHINE 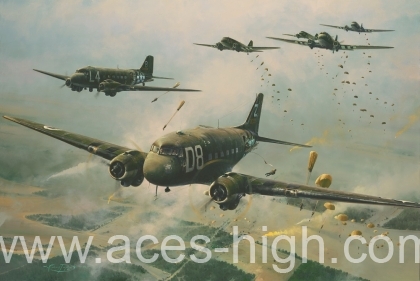 On Sunday 17 September 1944, the first day of Operation Market Garden, C-47 Dakotas of the 439th Troop Carrier Group dropped thousands of paratroopers from the 82nd and 101st Airborne Divisions into Holland, a hundred and fifty miles behind enemy lines. This daring operation, the largest airborne assault of World War II, aimed to capture and secure vital bridges in the Allies’ push towards the Rhine.

This TEN signature edition is additionally signed by the following veterans of the 506th P.I.R, 101st Airborne:

Each print in this specially released edition is issued with a companion print of Robert’s superb pencil drawing LONG HARD ROAD depicting the men of the 101st Airborne preparing for their parachute drop into occupied territory on the eve of D-Day, June 1944. Each two print set is personally signed by a staggering TWENTY ONE veterans of the 506th P.I.R, 101st Airborne:

Each print in this exclusively limited edition will have an original pencil drawing inscribed in the border by the master of aviation art, Robert Taylor. Each ELEVEN signature Remarque carries the same signatures as the Collectors edition but is additionally a further veteran of ‘Easy’ Company, 506th P.I.R:

The Band of Brothers Tribute Proofs

With ALL the components of the 101st Airborne Edition, the Tribute Proofs are released with a unique, ORIGINAL, hand-signed and hand-numbered pencil drawing by artist Robert Taylor. The rarity of these FIVE Tribute Proofs is unsurpassed and each spectacular drawing is conservation matted to include a replica ‘Screaming Eagle’ patch. Also included is the authentic signature of the legendary leader of Easy Company – Major DICK WINTERS, along with three further highly respected members of the unit: