Home > Artists > Robert Taylor > ANOTHER ONE FOR THE BAG

ANOTHER ONE FOR THE BAG 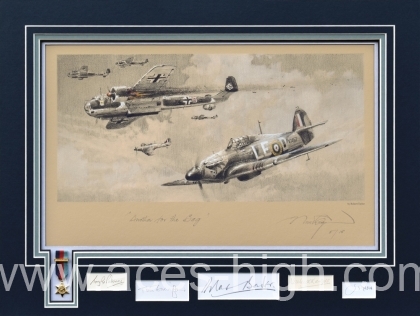 During the Battle of Britain few fighters were tougher than the Hawker Hurricane. Despite being slower and lacking the performance of the iconic Spitfire, from the beginning of July until the end of October 1940 four out of every five enemy aircraft destroyed fell victim to the powerful guns of the rugged, go-anywhere, do-anything Hurricane. As Fighter Command honed its tactics over that long, hot summer, its Spitfire squadrons would aim for the enemy’s Bf109 escorts whilst the Hurricanes ripped through the bomber formations.

Unsurprisingly many of Fighter Command’s most famous Aces flew the Hurricane and few are better known than Douglas Bader, whose aircraft forms the centrepiece of Robert’s drawing Another One For The Bag. Crafted with skills that few others possess, Robert’s masterwork depicts the famous Ace leading the Hurricanes of 242 Squadron and his Duxford Big Wing into action against Luftwaffe bombers during the early afternoon of Sunday 15 September 1940, the day on which the Luftwaffe made its final, massive effort to defeat the RAF. During the morning Bader and his Wing had already engaged the enemy over the outskirts of London; now, having raced home to re-fuel and re-arm they were back over the Thames ready to meet another enemy battle group. As one by one the enemy Bf109s depleted their fuel reserves and turned for France the bombers were left to fend for themselves. They couldn’t. Robert takes us to that part of the action as Bader scores a direct hit on an enemy Dornier Do17 during an afternoon encounter in which he destroyed one and damaged two bombers.

It was a similar story across south-east England. As the weary pilots returned to base they knew they had won a great victory. The tide of battle had at last turned in the RAF’s favour and Sunday 15 September 1940 would forever be known as ‘The Greatest Day’.

To commemorate all the fighter pilots who flew Hurricanes during the Battle of Britain, Robert’s superb drawing has been faithfully reproduced as a high quality giclée fine art print on textured velvet paper. The historical importance of this extremely limited edition is highlighted by the inclusion of an original autograph of the legendary Ace depicted, alongside a further four highly-regarded veterans who flew Hurricanes in combat during the battle.

Only FIFTEEN copies are available worldwide through the Military Gallery, Robert’s exclusive publisher, with every print signed, numbered and hand-titled by Robert himself. Only then is each copy mounted to full conservation standards to include a museum-quality reproduction miniature 1939-1945 Star with Battle of Britain Clasp, and a total of FIVE veteran autographs: