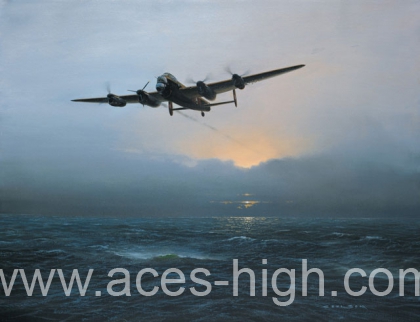 Introduced into service in mid-1942, the average life expectancy of a newly operational Lancaster was just a few months. For the crews themselves, the outlook was bleak and losses for Bomber Command were staggering but their exploits of courage and persistence are legendary.

Crews continuously battled against enemy fighters, heavy flak and severe cold, succeeding against overwhelming odds in appalling flying conditions. There are countless reports of great bravery, many unrewarded and it was often only the close bond that these man shared and a selfless devotion to duty that kept them fighting on.

Gerald’s superb piece depicts a one such Lancaster, heavily damaged by flak and with one engine out, it slowly makes its way home over the North Sea as the crew desperately struggle to reach the safety of the British mainland.

Each print has been personally signed by the artist as well as the following Lancaster crew:

Along with the signatures on the Limited Edition, each Artist Proof has been additionally signed by: