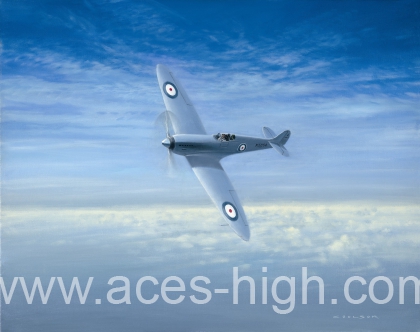 When test pilot Captain ‘Mutt’ Summer flew a sleek new monoplane fighter into the air for the first time on 5 March 1936 neither he, nor its designer R J Mitchell, had any idea as to the legend they had begun.

Gerald Coulson’s majestic study of Spitfire prototype K5054, resplendent in its new all-blue paint scheme, is seen banking high above the clouds during an early test flight in March 1936.

This superb limited edition was issued as a tribute to the Spitfire in its 70th Anniversary year and each copy of Rhapsody in Blue is accompanied by a superb matching numbered companion print MITCHELL'S MASTERPIECE. The edition is exclusively limited to an unbelievable 70 copies worldwide.

Each print of Rhapsody in Blue is signed by the artist Gerald Coulson together with a top leading Spitfire test pilot.