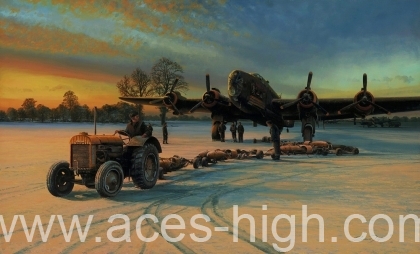 Flown by many crews, Halifax LV907 ‘Friday 13th’ was typical of the four-engined heavy bombers that formed the backbone of RAF Bomber Command, and served with 158 Squadron as a symbol to the enduring bravery of the men who flew the ‘heavies’ in action.

As dawn breaks over RAF Lissett it reveals that last night’s biting wind has once again brought a covering of snow to the airfield. But, with conditions forecast to improve, tonight’s operation to bomb industrial targets in Germany is set to proceed, and ground crew start to prepare Halifax Mk3 LV907 ‘F-Freddy’, simply known as ‘Friday 13th’, for action.

Each print has been individually signed in pencil by THREE veterans who flew Halifaxes with 158 Sqn:

Together with the Remarqued Editions, the EIGHT signature Collectors’ Edition is additionally signed by the following 158 Squadron veterans:

These magnificient Tribute Proofs, created with a unique and highly-collectible original pencil drawing by Richard Taylor, are issued to include the matted signatures of no less than FIVE of the Royal Air Force's most eminent wartime leaders.