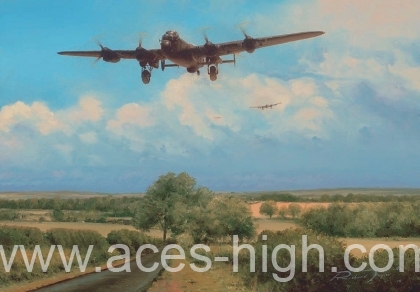 The mighty four-engined Avro Lancaster was the most famous and successful night bomber of World War II.  Flown by the RAF, RCAF and RAAF the much-loved Lancaster formed the backbone of Bomber Command.

A peaceful corner of eastern England is temporarily awakened from its summer slumbers by the thunder of Merlin engines, the familiar roar announcing the safe return of a squadron of Lancasters from their latest operation.  With wheels already down, the pilots throttle back the huge engines as the heavies make their final approach to the airfield nearby.  Below them, quiet will soon return to the countryside and on base, after debrief, the weary bomber crews will take a well-earned rest.  They don't expect it to last long; they could be flying again tonight.

This moving tribute to the RAF's Lancaster crews by Richard Taylor, one of aviation art's youngest and most talented artists, is personally signed by two highly-respected Lancaster aircrew who flew with Bomber Command's Pathfinder Force during WWII:

This memorable collector's piece has been conservation mounted to include museum quality reproduction RAF Wings and the original signature of a highly-regarded WWII veteran who was instrumental in forming Bomber Command's Pathfinder Force: