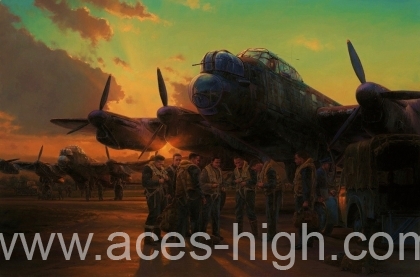 Everyone at Scampton suspected that something big was about to happen. The crews of the recently formed 617 Squadron, hand-picked by their CO Wing Commander Guy Gibson, had been training hard for weeks and the rumour on the grapevine suggested it might be the Tirpitz they were after. But then, late in the afternoon of 16 May 1943 came the call over the station tannoy that they had all been waiting for: "All crews of 617 Squadron to report to the briefing room - immediately."

The buzz of excited conversation dropped into silence as Gibson addressed them, and the secret was shared: their small force was about to attack the major dams of western Germany. It was what they had been waiting for and they would go that night.

As the sun’s rays fade fast, it is the signal to start the engines and Guy Gibson readies his crew to climb inside their waiting Lancaster - AJ-G 'George'.

Released as part of The Dambusters 70th Anniversary Portfolio to commemorate this historic event, Anthony’s atmospheric piece is available individually or as a pair with THE BREACH.

Every print in all of the editions has been hand numbered and personally signed by the artist as well as a veteran who served on that historic night in 1943: