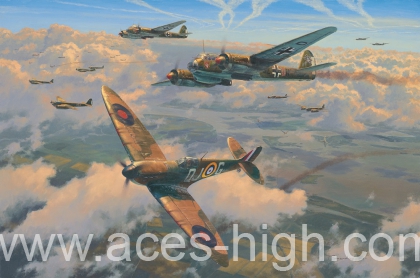 The Luftwaffe had done everything in its power to pummel London into submission but they failed. By the end of September 1940 their losses were mounting.

For weeks since the early days of September, London had been the main target for the Luftwaffe and during that time Luftwaffe High Command had grown increasingly despondent as their losses steadily mounted. Far from being on the brink of collapse RAF Fighter Command, though vastly outnumbered, had shown an incredible resilience. The fighting had reached a dramatic climax on Sunday 15 September when, bloodied and bruised, the Luftwaffe had lost the upper hand on a day of intense combat that had culminated with a humiliating retreat. Almost every day that had passed since then had seen the Luftwaffe do everything in its power to pummel London and regain the initiative, but the daylight raids were becoming increasingly costly. On Friday 27 September, 80 days after the Battle of Britain had officially begun, the Luftwaffe came once more, this time concentrating on the fastest bombers they had – Ju88s and Bf110s. And they came in force, principally targeting London and Bristol.

Anthony Saunders’ superb painting depicts one of these raids, this time by bombers from KG77 as they head over the Medway Estuary, east of the City of London, in an attempt to attack the capital’s warehouses and docks. Among the many units defending the capital that day was 92 Squadron from Biggin Hill and Anthony portrays the Spitfire of Pilot Officer Geoffrey Wellum in his dramatic piece. With a deft flick of the rudder Wellum banks his fighter away to port seconds after sharing in the destruction of a Ju88. It was just one of more than 50 German aircraft destroyed by the RAF during the day.

Joining artist Anthony Saunders in signing every print is a highly distinguished Spitfire pilot who flew in the Battle of Britain:

Each print in this three signature edition is additionally signed by two famous Battle of Britain fighter pilots:

The FIVE signature Artist Proofs and Remarques are additionally signed by a further two highly regarded fighter pilots who fought in the Battle of Britain: