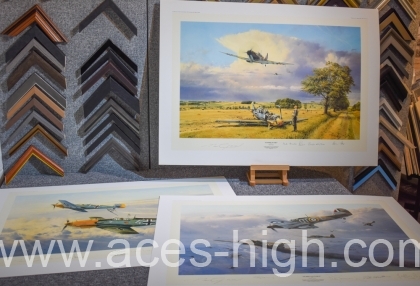 Originally released in 1990 to commemorate the 50th Anniversary of the Battle of Britain, we rarely come across any of these titles, let alone a matching-numbered set!

With a total of TWELVE combined signatures of RAF and Luftwaffe veterans, we're sure they won't be around for long!

During the height of the Battle of Britain a Luftwaffe pilot, standing beside his downed Me109, looks on as Spitfires of 54 Squadron returning to base at Hornchurch, roar overhead.

Considered by many as a defining image of the RAF's stubborn resistance during the Battle of Britain, this moving piece is personally signed for posterity by FOUR legendary Aces who flew during the battle:

A swarm of Me109s peel off to attack a bunch of Spitfires which have dived out of the sun upon a large formation of He111s.

Now one of the most desirable prints in Robert's extensive portfolio, this superb print has been autographed by FOUR of the Luftwaffe’s great Battle of Britain fighter leaders:

Hurricanes of No.257 Squadron attack a large force of Heinkel 111 and Dornier 17 bombers at 12,000 feet over London on 15th September 1940, during the climax of the Battle of Britain.

Paying tribute to the legendary aircraft that accounted for 80% of RAF victories during the Battle of Britain – the Hawker Hurricane – this powerful print has been signed and authenticated by FOUR famous Hurricane Aces who flew during the battle: