We’re delighted to announce that we’ll be joined by pilots who flew RAF fast-jets to meet customers and sign items for collectors. 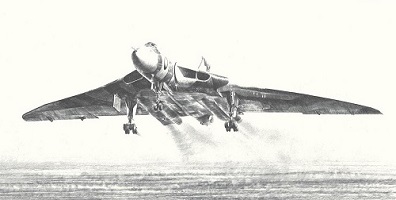 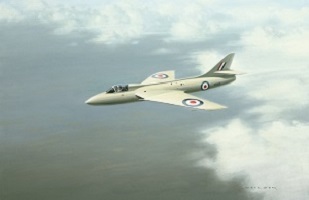 Group Captain ROGER BEAZLEY CBE, AFC, BA, FRAeS - served with 19(F) Sqn on Lightnings at Gutersloh in Germany and 43(F) Sqn on Phantoms at Leuchars in Scotland. Following training at ETPS Roger served for 5 years at Boscombe Down principally flight test work on the Hawk, Jaguar, Phantom, Buccaneer, Tornado and others, including some foreign aircraft. Subsequent flight test work centered on advanced systems research at RAE Bedford on aircraft ranging from Gnat to Nimrod and such rotary types as Wessex and Sea King. Final flight test service appointments included Head of the Experimental Flying Department at the Royal Aerospace Establishment at Farnborough (which encompassed Bedford, Aberporth, Llanbedr and West Freugh) and then became Director of Flying (Research & Development) within the UK Ministry of Defence.

Squadron Leader TOM LECKY-THOMPSON - joining the RAF at 17 he served with 249 Sqn during the Suez Conflict before undertaking an instructional tour on Vampires. Tom then joined 54 Sqn on Hunters and was posted as Flight Commander to No.1(F) Sqn before being selected to become the first fighter leader instructor at the Pakistan Air Force Fighter Leader School. Back in the UK he completed ETPS and joined A Sqn at A&AEE flying many aircraft including the Lightning, Phantom, Hunter, Javelin, Canberra, Jet Provost, Kestrel, Harrier, Basset, Harvard and Chipmunk. Tom was then involved in the first Atlantic crossing by a Harrier, plus the first jet landings at RAF St Pancras and the centre of New York before winning a Transatlantic Air Race in 1969. After spells with BAC/Bae and Rolls Royce he returned to the RAF and was involved in an exchange in Dubai instructing the United Arab Emirates Air Force.

Air Vice-Marshal MIKE ADAMS CB AFC - joining the RAF for his national service in 1952, he completed pilot training and flew Canberras with 207, 115 and 32 Sqns both in the UK and abroad, followed by the Flying Instructors Course. In 1963 he went to Test Pilot’s School and then spent three tours of duty at the Aeroplane & Armament Experimental Establishment flying a wide variety of combat aircraft including the Lightning, Draken, T38, T-2 Buckeye, S-3 Viking, P-3 Orion, OV-1 Mohawk and most British jets. Having flown the P1127, Kestrel and Harrier, he was attached to the Harrier development programme for two years from 1967. He was later CO of the Empire Test Pilot’s School and in 1984 was AOC RAF training units in the UK. Mike served in the RAF for 36 years.

Squadron Leader ROBERT GWYN WILLIAMS - flew Hunters with 43 Sqn in Aden and 8 Sqn in Muharrak before joining No 4FTS as an instructor on Gnats. He was then selected for an exchange with the Canadian Armed Forces in Quebec flying the F-101 Voodoo with 416 Sqn, 22nd NORAD. Moving back to the UK he joined 4 Sqn flying Gnats before serving with the MoD responsible for Air Defence and Flying Tactics. He then spent over 20 years with the Civil Aviation Authority which included 10 years flying Concorde.

Flight Lieutenant BOB LEEDHAM - originally a Pilot on Beauforts with 86 Sqn, Bob then joined 90 Sqn equipped with Stirlings and completed a full tour of Operations. Having finished this first tour, he was later attached to 57 Sqn on Lancasters as a revision instructor brought in to help reduce the number of losses of new and inexperienced crews. Post-war with BOAC he flew the first Comet 4 transatlantic flight from New York to London.

Wing Commander PAUL WEST - joining the RAF in 1974 he completed Navigator training and served with 617 Sqn for a tour on Vulcans which included detachments to Canada, Malta and Cyprus. Following Tornado GR1 training in the Strike/Attack role, he was posted to 17 (Fighter) Sqn in Germany where he completed two tours before returning to the UK.  In 1993 he was posted to 617 Sqn at RAF Marham where he served the majority of his tour on the Tornado GR1 as the Squadron Executive Officer and subsequent roles include time at HQ Strike Command / Air Command, the MOD and USAF Ramstein Air Base in Germany. Paul left the RAF in 2009 after 35 years.

Entry to the event is completely free but for safety reasons by ticket only, so to keep the event comfortable for veterans and enthusiasts we ask that you please RESERVE YOUR TICKET IN ADVANCE.

Our guests are happy to sign autographs for collectors and items purchased at the event over £40 can be signed free of charge. Bookings are now being taken so please contact us to secure your place.