In this special 75th Anniversary year of D-Day, we continue our series of events to commemorate the Battle for Normandy and liberation of Europe during WWII. 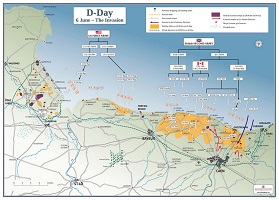 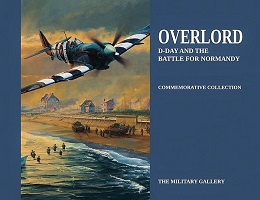 We’re proud to be hosting this event at the UK Gallery where we’ll be joined by veterans who took part in this historic period to sign autographs for collectors.

Sergeant Major ROGER DRISCOLL – aged just 14 when he joined the Military College of Science, Roger went on to serve with the 13th Medium Regiment, Royal Artillery as a skilled mechanic known as an artificer. In the lead up to D-Day his regiment were sent to the borders of Scotland along with four others as part of Operation Fortitude to mislead the German high command as to the location of the pending invasion. On returning from Scotland the unit made their way to Normandy and landed at Le Hamel near Arromanches on 20th June where Roger’s main responsibility was servicing, repairing and maintaining weapons. He fought through France all the way to Hamburg in Germany where he’d meet his future wife.

Sapper GEORGE BATTS MBE Ld'H – after joining the Royal Engineers in 1943, George was just 18 when he landed on Gold Beach on the morning of D-Day. He spent most of the following days defusing mines and booby-traps from the beaches and clearing the area where the Mulberry Harbour was due to be constructed at Arromanches. In March 1945 he then went to the Far East where his war ended. George later became National Secretary for the Normandy Veterans Association and Patron of the Normandy Memorial Trust, and was instrumental in securing the backing of the UK Government to build a lasting monument in Normandy to honour all British Armed forces and civilian services who lost their lives during the Campaign.

Able Seaman ROBERT BARNETT Ld'H – serving with the Royal Navy, Robert was part of the crew on HMS Redpole manning the portside Bofors guns. On D-Day they waited at anchor for 12 hours before heading to Juno beach escorting landing craft full of Canadian troops on their approaches. The following day, on 7 June, they were heading back to France escorting parts of the Mulberry harbour being towed to Arromanches when they saw a Spitfire pilot eject from his aircraft. They promptly picked up the airman who joined them on the trip before heading up the channel to Greenwich. HMS Redpole is thought to be the most used Modified Black Swan class sloop of the Royal Navy during the war.

General Sir HUGH BEACH GBE KCB MC – joining the Royal Engineers in August 1941, Sir Hugh served with 621 Field Squadron and landed in France on D-Day +4 aged 21. In early September, as they advanced through Normandy and approached La Bassée canal crossing in northern France, Sir Hugh was in a Morris Scout Car sent to check the bridge was suitable for tanks to cross. Armed only with a Sten gun, he crept towards the bridge only to be attacked by a group of German servicemen and seriously injured. After the war he went on to hold senior posts in the Armed Forces and the Ministry of Defence.

Able Seaman GEORGE CHANDLER MiD Ld’H – having joined the Royal Navy in 1943 aged 18, George served as a Gun Layer on MTB 710, 59th flotilla on coastal defence duties, with regular channel night-time enemy engagements. In the run up to D-Day they trained with US Rangers on the south coast, honing troop seaborne manoeuvres and on D-Day itself served as a defence escort to invasion forces in the American sector close to Omaha beach. George later served in the Mediterranean theatre, Adriatic sea, in close operational support with the LRDG and SBS special duties sections.

Entry to our Gallery events is FREE but for safety reasons it is important to RESERVE YOUR TICKET IN ADVANCE. Unfortunately, on event days, we can't allow entry to anyone who hasn't reserved a place. Even if you're not 100% sure that you can make it, please book your place in advance and if your plans change, just let us know.

Bookings are now being taken so please contact us to reserve your place! 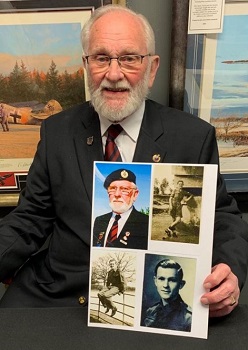 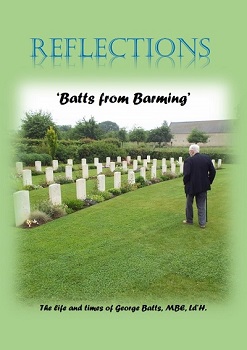 We’ll have very limited quantities of a new book available on the day:

REFLECTIONS – Batts from Barming – The biography of George Batts, Patron of the Normandy Memorial Trust

We’re proud to be supporting this worthy cause and all proceeds go directly to the memorial fund – CONTACT US for more details or to reserve your copy.