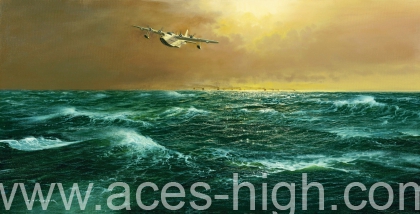 It was tough, dependable and, for a German U-boat, deadly. But for the crews who manned the ships of the North Atlantic convoys the Sunderland flying boat was to become a legend; for them it was the sentinel of the seas. Winston Churchill wrote that the only thing that really worried him during the war was the submarine menace; he knew that if the vital North Atlantic lifeline was severed, there could be no ultimate victory. The task facing the Allies was immense, and the Battle of the Atlantic raged for nearly three years before, in May 1943, heavy losses forced Admiral Doenitz to pull his U-boats out of the North Atlantic. That same month five submarines were sunk by Sunderlands. It was the turning point of the Battle of the Atlantic, and for the next year the Allies were able to build up supplies and troops for the D-Day invasion.

Gerald Coulson’s magnificent painting Atlantic Convoy is a moving tribute to the aircrew of Coastal Command and portrays a typical North Atlantic convoy scene to perfection. The crew of a lone Sunderland, its four mighty radial piston engines thrumming powerfully against the gathering wind, keep a vigilant look out for a distant sighting of a U-boat. Behind them the convoy, laden with vital supplies, ploughs on relentlessly, ever closer to Britain, and safety.

Produced and printed onto fine canvas to match the original painting, and then mounted on to high quality stretchers, each of these carefully crafted Giclées is fully authorised and personally hand signed by artist Gerald Coulson. Each superb canvas is released pre-stretched and ready to simply drop into a frame of your choice.