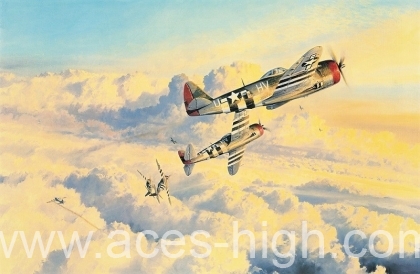 Hub Zemke was a fighter pilot and commander who led from the front.

A great tactician too, it was in no small measure due to the air combat tactics introduced to the 56th Fighter Group by its mercurial leader that by the end of WW2 it had become the top-scoring Fighter Group in the USAF. This highly successful unit spawned some of the top fighter aces in the European theatre: Gabby Gabreski with 34.5 victories, Robert Johnson with 28 victories, and the colourful Ace, Walker Bud Mahurin who shot down 21 German aircraft.

High over Germany at the extremity of its range, the P-47 of Hub Zemke is seen leading his pilots in to defend a stricken B-17 against the persistent attacks of marauding Fw190s. Already damaged, the B-17 has dropped from the relative safety of the formation, and protection from the P-47s is now its only chance of survival.

Each print has been signed by the artist and four famous pilots who all flew with this illustrious unit: