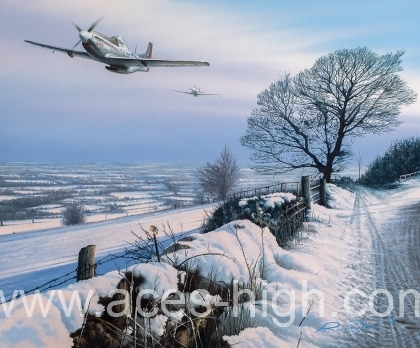 The winter of 1944-45 was cold, bitterly cold. Plunging temperatures brought ice, freezing fog and heavy falls of snow. All across East Anglia runways stood bleak and frost-bound. The Eighth Air Force was often grounded, their bombers under wraps, engines oiled, warmed and ready for any break in the banks of murky freezing fog that would allow them to fly. When those breaks in the weather came, the Eighth Air Force was back into action.

Richard’s beautiful cameo painting depicts the magical scene as clearing skies reveal a morning landscape bathed in white. A fresh fall of snow overnight has brought an unusual stillness to the English countryside, broken only by the roar of Merlin engines as Robin Olds and pilots from the 434th Fighter Squadron, 479th Fighter Group manage to get airborne from a hastily cleared runway to check out their Mustangs. Their presence is a reminder that despite the weather the bitter struggle continues in war-torn mainland Europe and should a mission soon be possible, they’ll be ready.

Sure to be popular amongst collector’s, especially given the limited quantities printed, every copy of Winter’s Wings bears the true and originals autograph of three top P-51 Mustang fighter pilots who, although sadly no longer with us, represent the very best of the courageous men who flew and fought with the Eighth Air Force in the skies over Europe. These include the famous Ace depicted, Robin Olds, creating a historic collectors piece to be treasured.

Along with artist Richard Taylor, every print carries the original signatures of three famous P-51 Mustang Aces who flew in combat during the Second World War:

Each print in these highly-restricted editions has been conservation mounted to include a museum-quality reproduction 8th Air Force shoulder patch, USAAF pilot wings and the original autograph of a famous P-51 Mustang Ace:

Veteran-signed and conservation mounted with all components of the Collector’s Edition, just TEN copies are available worldwide which will be returned to Richard’s studio and further enhanced with an original pencil Remarque, hand drawn in the border of the print.

Richard is regarded as one of the most gifted pencil artists in the industry and his original works are hugely sought after. It’s therefore no surprise that his Remarque editions are in such high demand.

Each Remarque is different to the next and completely unique making them very collectable.

Why not commission your own personal Remarque drawing?

Remarques are hand crafted to order so if you have a special request, such as a particular scene or specific aircraft markings, please just ask and we’ll do our best to accommodate.