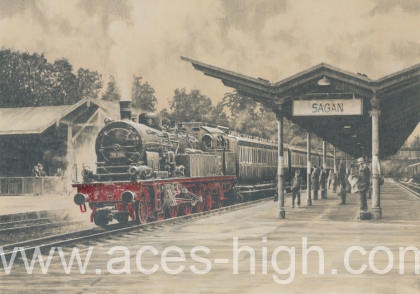 The Great Escape was perhaps the most daring escape attempt of the war, involving the mass breakout of more than 200 Allied Airmen by digging three long tunnels (nicknamed Tom, Dick, and Harry), an audacious feat of tunnelling that would be long and dangerous. After tunnels Tom and Dick were discovered by the German guards the prisoners concentrated on tunnel Harry and just after 22.00hrs on the night of 24th March 1944, the first escapee broke through to the surface – only to find it well short of the surrounding trees and next to a guard tower. The escapees would have to crawl to the cover of the trees right under the noses of the patrolling sentries.

Despite a number of setbacks seventy six POW's managed to crawl out of the tunnel before it was discovered and most of them headed for the Sagan train station. However with no knowledge and the local area and in virtual darkness most were unable to find the entrance to the station which was recessed in an underground pedestrian tunnel. Consequently many missed their night time trains and were forced to wait until daylight.

Richard Taylor's superb drawing, completed in his trademark graphite and paint combination, recreates the scene as escaped POW's, dressed in plain clothes, mix with local civilians in an attempt to catch the early morning train and make their bid for freedom.

Every print is issued with a matching numbered, signed copy of the book:

In some ways, Alfie Fripp’s war ended when he was shot down on over Germany in October 1939. In many others, it was only just beginning.

Squadron Leader Alfie Fripp was the oldest surviving and longest-serving British prisoner of war until his death in 2013 – the last of the so-called ‘39-ers’. Held in a succession of Nazi POW camps during World War II he worked alongside the Red Cross but would sneak supplies past German censors to secretly aid escape efforts. He was an inmate at Stalag Luft III during the Great Escape, in fact his own skipper – Mike Casey – was shot as one of the ‘50’ who were captured.

Exclusively limited, every print in this new edition is hand numbered and personally signed by the artist together with FOUR veterans who played an integral part in the Great Escape. They were all members of the 200 who were to escape.

Each of the remarqued editions is issued conservation matted to include the original signatures of a further six veterans who took part in the Great Escape creating a highly desirable TEN signature collectors piece.