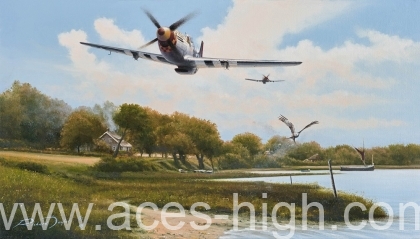 A perfect afternoon was ending as the summer of 1944 drew to a close and, as a gentle breeze blew over the banks of the small river close to the Suffolk coast, the war seemed a million miles away.

But suddenly the spell is broken: the thunderous roar of racing Merlin engines shatters the peace as, just feet above the ground P-51 Mustangs with fuselages glinting in the sun, power through the air as they head for home. Their dangerous mission is almost at an end and soon the tensions of escort duty and combat can be put to one side, if only for a few hours, as tomorrow is sure to bring another day of action for the P-51 pilots of the Eighth Air Force.

In his memorable piece The Eagles Return, Richard Taylor uses spell-binding artistry to convey a heart-warming scene in tribute to those tough, determined and supremely brave aviators. It seems fitting that he’s chosen to depict Ace pilot ‘Bud’ Anderson in his P-51 ‘Old Crow’ in company with colleagues from the 363rd Fighter Squadron as they head back to Leiston after a gruelling escort mission over occupied Europe for the 357th Fighter Group – one of the most successful fighter units in the Eighth Air Force.

In tribute to those courageous pilots who flew the legendary P-51 Mustang during WWII, each print is mounted to full conservation standards to include the original autograph of the famous Ace depicted in Richard’s detailed study:

‘Bud’ Anderson went to England in 1943 with the 357th Fighter Group who, based at Leiston, Suffolk, would become one of the most successful fighter groups in the Eighth Air Force. Bud quickly showed his natural talent as a fighter pilot, scoring his first victory with the 363rd Fighter Squadron on one of the early Berlin daylight escort missions. After completing his first tour he volunteered for a second, arriving well in time to take part in the 357th’s most successful mission of the war on 27 November 1944 when he added three more victories to his growing score. By the end of the war Bud had flown 116 missions and credited with 16¼ air victories plus another on the ground to become the Group’s third highest-scoring Ace. During that time he was never hit by fire and never turned back for any reason.

Regarded as one of the most gifted exponents of pencil work in the industry, Richard will hand-craft an original drawing in the lower margin of these prints. If you have any particular request, such as specific aircraft markings, please ask when placing your order and we’ll do our best to accommodate.

Created with the serious collector in mind, and restricted to only TEN copies worldwide, each print is further enhanced with a unique, individually created double-size pencil drawing, once again finished in the graphite and paint combination that has gained Richard such outstanding international acclaim.

The REMARQUES and DOUBLE REMARQUES are issued conservation mounted with all components of the Limited Edition.

Personalise your copy to make it even more special!

We’re delighted to have highly-restricted quantities of original signatures that can be included within the matting of your piece. These include highly-regarded Pilots and Aces who flew with Bud Anderson and the 357th Fighter Group as shown in Richard’s stunning piece.