TO HELL AND BACK - OPERATION TIDAL WAVE 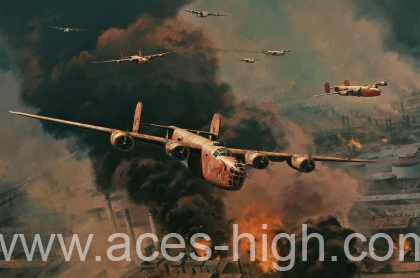 Oil was vital to every army in World War II: no army, navy or air force could move without it. Deprive Hitler’s armed forces of oil and the effect would be devastating.

Flying at low-level over the Astra Romana oil refinery, Lt James Merrick of the 98th Bomb Group powers his B-24 ‘Lil De-icer’ through the pall of burning debris as time-delayed bombs, dropped in error by a previous Group, explode beneath them. With any hope of surprise now lost, and taking heavy losses in the process, the crews of the 98th bravely hold their bombers on course.

This outstanding edition has been personally signed by three aircrew who took part in the epic mission, helping to make this one of the most accurate and memorable portrayals of the Ploesti raid ever released. Their contribution gives even greater meaning to this commemorative edition, providing enthusiasts with a historic and valuable collectors’ piece.