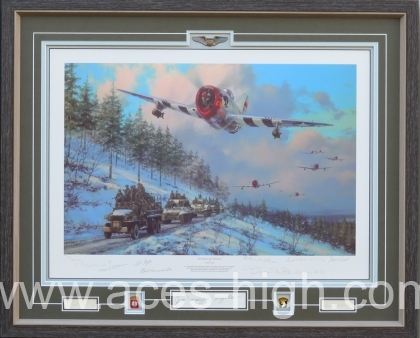 Anthony’s magnificent painting portrays P-47 Thunderbolts of the 509th Fighter Squadron, 405th Fighter Group, as they pass low over paratroopers of the 82nd Airborne Division advancing through heavy snow during the Battle of the Bulge, early January 1945. Major Robert ‘Blackie’ Blackburn, in his distinctive aircraft Chow Hound, leads his unit as they head out on a morning low-level bombing mission.

This Collector's Edition print has been personally signed by seven veterans who fought in the campaign including P-47 pilots and US paratroopers of both the 101st and 82nd Airborne Divisions. If that wasn't already special enough, our expert team have framed this unique copy to include the original autographs of a further three famous 82nd and 101st Airborne paratroopers, including one of the most decorated officer in the history of the 82nd.