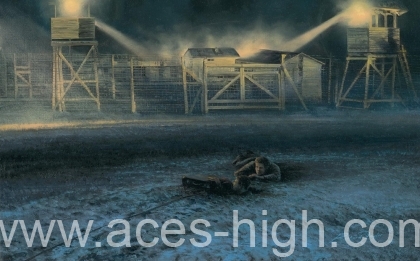 “Everyone in this room is living on borrowed time. By rights we should all be dead! The only reason that God allowed us this extra ration of life is so we can make life hell for the Hun… three bloody deep, bloody long tunnels will be dug – Tom, Dick, and Harry. One will succeed!”

With those words the chief escape officer in Stalag Luft III, Squadron Leader Roger Bushell RAF, announced his plan for perhaps the most daring escape attempt of the war – the mass breakout of 200 men through the digging of three long tunnels (nicknamed Tom, Dick, and Harry), an audacious feat of tunnelling that would be long and dangerous.

Just after 22.00hrs on the night of 24/25 March 1944, the first escapee broke through to the surface – only to find it well short of the surrounding trees. The escapees would have to crawl to the cover of the trees under the noses of the patrolling sentries.

Joining the artist, every print in this exclusive edition has been individually signed by the following veteran from Stalag Luft III who were involved in The Great Escape:

Each print is in this FIVE signature edition is also signed by:

With all the signatures of the Escapers’ Edition, the Tribute Proofs are conservation matted to include the additional ORIGINAL signatures of three famous officers who also took part in ‘The Great Escape’.