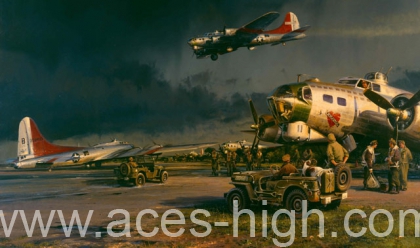 The drama of B-17s of the 34th Bomb Group returning from a raid in the final weeks of the war is skilfully portrayed against one of Robert Taylor’s equally dramatic English skies. In a painting packed with atmosphere and highly detailed content, this magnificent image not only brings to life the glorious Flying Fortresses of the USAAF, but also the lives of the brave young men who flew them, such as the two 34th Bomb Group skippers who signed each and every print.

Originally issued to accompany Robert Taylor’s landmark Masterworks book, this beautiful print was also released in two other, now rare editions. The Generals Edition was issued with a book plate signed by General Adolf Galland, one of the Luftwaffe’s most lionised leaders, together with a delightful, pilot signed, drawing print of Bader’s famous Bus Company. But the most prized edition of all, the Aces Edition - which sold out at the publisher on publication – was issued with a now historic and much sought after book plate. Those book plates contained twenty signatures collected from some of the illustrious aviators of World War II together with that of a World War I fighter pilot! Signatures of World War I fighter pilots are now so rare as to be almost non-existent but we so sometimes still find a copy. What more could a potential collector ask for?

In addition to the artist, every print in this magnificent edition is signed by: